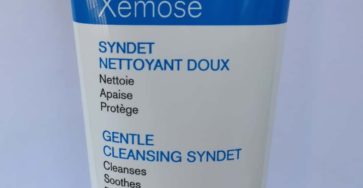 When it comes to a cleanser made for dry or atopic skin, we must take into account how gentler it is and how much hydration can it provide to the skin. And here’s when this fabulous cleanser role comes!

Uriage Xemose gentle cleansing syndet is a gentle cleanser with a cream texture (but able to do some bubbles due to its surfactants content) formulated for those who have an atopic or very dry skin.

This cleanser can be applied into the face or in the body since it’s gentle enough for both.

When it comes to its texture, I have to admit that this cleanser has one of the best textures I’ve ever tried.

It’s cream with a bit of foaming texture spreads very well on dry skin and once it is removed with water it leaves a little but not noticeable at all hydrating film on the skin.

Even though is for dry skin the texture is suitable for those with normal skin or oily skin trying to combat dehydration or weakened skin barrier.

The product does not leave any flakes neither shines into the skin.

It can remove any cream from the skin (makeup is an exception, I guess, since I’ve not tried it) without being strippy.

It’s the first cleanser for dry skin that I’ve tried that is able to remove sunscreen at first. And that’s something awesome since other cleansers made for oily skin haven’t achieved this at first cleansing.

When it comes to the hydration, the feel of hydration that it provides is not too much, but for a cleanser with magnesium laureth sulfate is more than I expected since i’ve used it during the end of accutane course (a potent anti acne drug that leaves skin very dry) and I didn’t find it stinging.

It definitely helps improving skin barrier function since it has a neutral pH, no fragrance and includes the patented Cerasterol-2F.

Even though this formula is designed for dry and atopic prone skin, it does not posse any acne risk since it does not have any comedogenic ingredient.

Research shows that apeseed oil on its own it’s an antioxidant that can inhibit reactive oxidative species, furthermore it has anti-aging and anti inflammatory benefits.

An emollient ingredient too, rich in fatty acids, specially linolenic acid and palmitoleic acid which makes it an anti inflammatory ingredient.

Due to its anti inflammatory properties, it helps with dry and atopic prone skin.

All of them are considered safe and gentler than other surfactans types.

All of them are able to remove dirt and impurities from skin without stripping it.

Even though magnesium laureth sulfate is not the gentlest option when it comes to an atopic skin, in this case it does not pose a risk since it does not dry out skin and it mixed with other gentler surfactants.

Due to its polysorbate content it’s not fungal acne (or folliculytis prone skin) safe, but it seems like it does not include too much quantity and posses a minimal risk since I’m folliculytis prone and I’ve not experienced any new pimple.

Glycerin has the ability to attract water and this makes it a great ally for those with dry skin.

It’s naturally presented in human’s skin and does not posse any irritation risk.

A product can’t be perfect, and here’s when the bad ingredients arrieve.

Uriage has definitely not made a great choice, it has used citric acid as a pH adjuster, citric acid on its own is not bad but they could have used a gentler pH adjusters due to the fact that this cleanser it’s made for atopic skin. However it does not posses any risk sice it uses low amounts of it.

However, it’s a cleanser and it does not posse high risk but I would have definitely chosen another ingredient as preservative.

When it comes to the odor, we find that it has an slighly chemical odor (nothing strong, mostly light) and it’s completely fine since the odor goes away after washing.

It does not have fragrance which it’s something very good since fragrance can irritate atopic and dry skin (it can actually irritate all skin types but these skin types tend to get irrated easier).

You can find 200ml tube starting from 7.5€ and the 500ml one from 10€ which makes this product very affordable since it’s not necessary to use big amounts to do an effective cleansing.

Furthermore you get 250ml more for just 2.5€ with a pump dispenser with can last you many months.

My mother uses it twice every day and the 200ml version lasted her 5 months using a small product amount, but it will deppend on the person.

Even though this cleanser it’s gentle and it does not dry out skin I don’t find it the best choice for those with atopic skin.

Atopic skin tends to be agravatted with allergies, if you’re not allergic to DMDM Hydantoin it may be fine for you.

For those who have dry skin and wants a simple cleanser that’s avery good choice since it’s really cheap and incllude a good selection of emollients and hydrators.

However I don’t think the emollient content is enough and lacks from other important skin barrier supporting ingredients to be classified as an atopic skin cleanser.