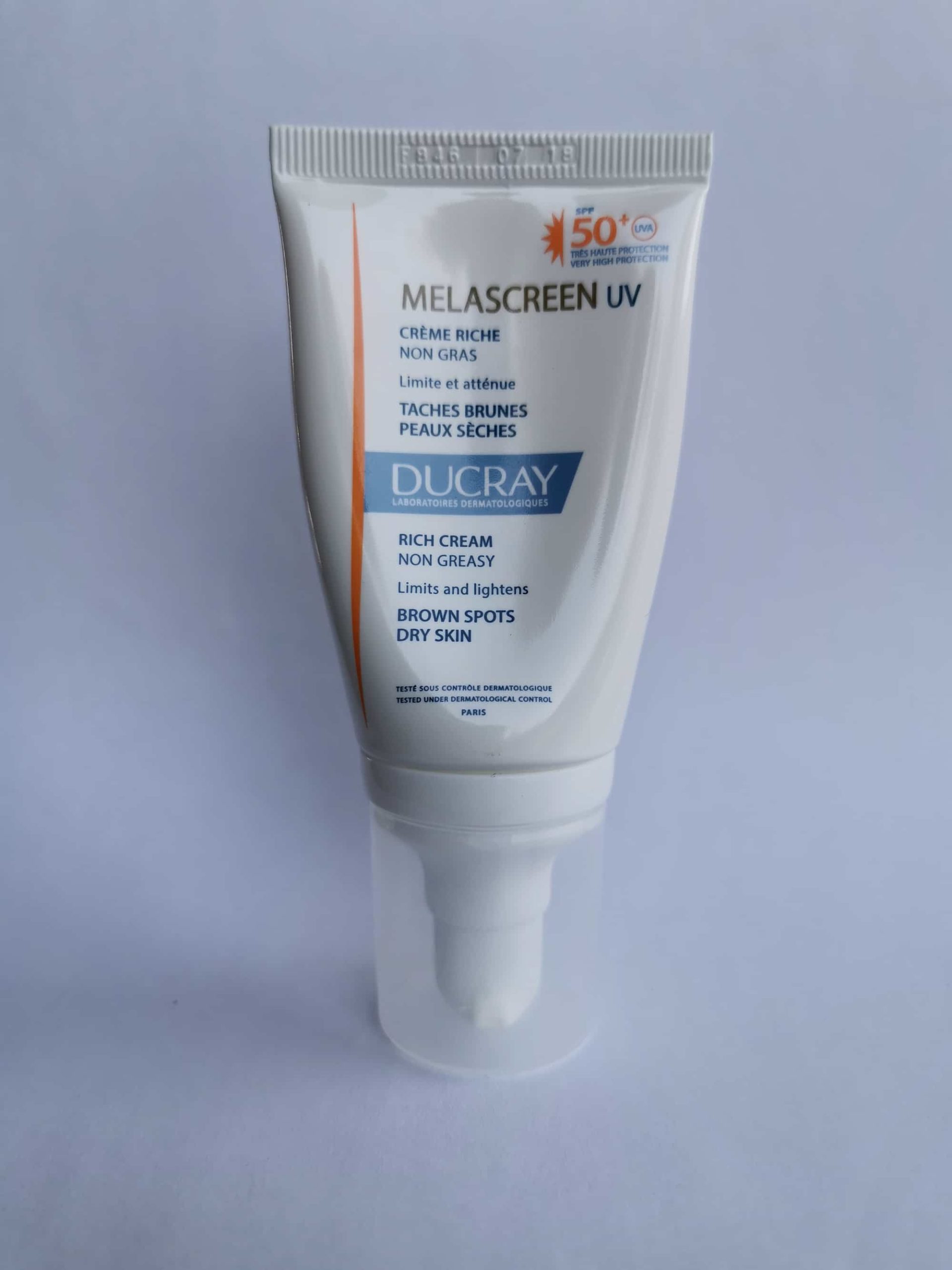 By Jose Luis Ruiz on September 25th, 2019 in Skincare, Reviews

One of my favorite Ducray’s product is Ducray melascreen UV line both light and rich cream, in this case I’ll talk about light cream.

I’ve been using Ducray melascreen UV light cream during at least 4 months and I don’t want to say too much before the verdict but I have repurchased more bottles!

If you’ve already used Avene’ sunscreen, Ducray’s sunscreen will result very familiar to you since it has basically the same texture and a very similar formula.

This is definitely the worst Ducray melascreen feature. Since one of its ingredients is tinosorb M (one of the best sunscreen filters) it leaves a white cast on the skin.

The white cast is similar to Avene’ suncreen and I think it won’t bee to noticeable in those who have fair skin, but for those who have a medium or darker tones it will be a bit noticeable.

Once the sunscreen it’s applied it leaves a mate finish that will leave a matte appearance during all day in combination and oily skins. However, if your skin is extremely oiler (like mine some times) the matte effect won’t last all day in T zone but it does a very good job!

It does not feel sticky, but the texture is something similar to its appearance (I mean one of its drawbacks).

I think the texture is something heavy if you apply the right amount that the instructions say, it does not feel oily neither hydrating, it’s something like drier.

I find it with a similar texture than avene’ sunscreen, but in this case the texture is more rough and dry.

Maybe it’s not the most comfortable sunscreen to wear but you’ll get used to its feeling, since at the beginning I hated the texture and days later I didn’t feel it on my skin.

A friend of mine has tried the sunscreen and she thinks the texture is great for her skin and she don’t find it heavy.

It does not have any single comedogenic, allergen and paraben ingredient, so it’s completely fine to use on acne and sensitive prone skin.

Ducray claims that its antioxidant power is 100x more powerful than vitamin E, we can’t confirm that due to the lack of public studies about this compound.

It includes 3 new generation sunscreen filters: Tinosorb M, Tinosorb S (Both absorb UVB and UVA rays) and Uvasorb HEB (for UVB rays) that all of them have shown to be extremely effective and safe.

It’s almost impossible to get a burn with this sunscreen, believe me I haven’t got a burn neither sun redness since I’m using it.

The package says to reapply it every 2 hours, but since it uses new generation filters I don’t think that this is something necessary if you’re indoors, but make sure ro reapply at least once just in case.

Obviously, if you’re going to stay outdoors, swimming or sweating you should reapply it every 2 hours.

When it comes to its hydration level I don’t find it too hydrating, since there is a cream version for those who need more hydration or have dry skin, but it could replace an hydrating cream if you have oily skin.

Flawless. It does not have fragrance and for me it does not smell to nothing. It may have a slighly (very slight) odor to something chemical but it’s not an unplesant odor.

It comes in an airless dispenser that you have to push to get the product.

After finishing the product if you open the sunscreen tube you may get some amount to apply it one or two more times but it does a very good job at not wasting product leaving it in the bottle.

You can find this product from 9 to 13€ the bottle that has 40ml in Europe.

I don’t find it expensive comparing it to other sunscreens, but there are some brands like bioderma and uriage that are really cheap.

So price is good but if you want a similar and a cheaper product I would check Avene’ sunscreen if your main goal isn’t avoid pigment spots.

Its ingredients and price make this sunscreen a hard competitor for other sunscreen brands since it offer one of the best formulas.

When it comes to its effectiveness, Ducray melascreen uv light cream it’s one of the best sunscreen if your main goal is to prevent photoaging and pigment spots this could be one of the best and cheaper options.